(Morgan: Found a few posts drifting around in the Drafts. To the light of day they go!)

Today's build is the Gavroche Maquis Raider.  Following the normal rules of under 50 points and only the cards in the pack, here's what I put together, and how I would use her. 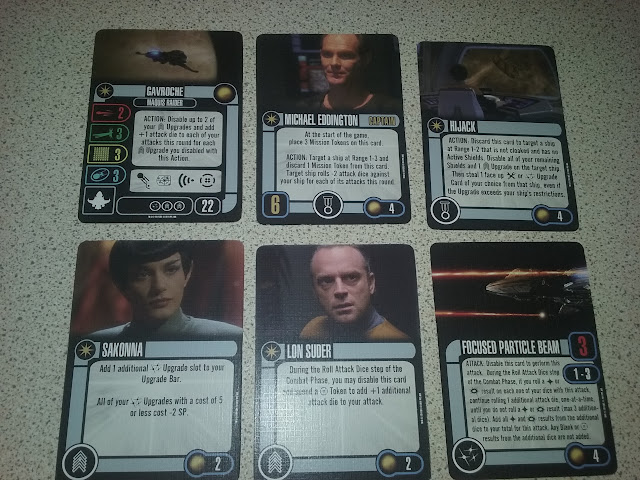 As always the named Gavroche.  Her ability to disable up to two crewman for more firepower turns this not threatening 2 attack ship into a scarier prospect.  Combined with the captain Eddington's ability of getting tokens you can use to reduce enemies return fire means the survivability of the ship is increased greatly.  His elite talent of Hijack is there to grab useful tech or weapons from enemy ships, always handy if they have something you want!, or just to deprive them of something.


For crew we have the Vulcan Sakonna, she adds another weapon option and makes all weapons 2 points cheaper, so she is basically free, and her main use will be fodder fro the ships ability.  Lon Suder is much the same, a cheap crewman for the ships ability, as his own is not as good as the ships.

The final item is the weapon focused particle beam, a 3 attack weapon, but can be more.  If you roll all 3 hits or crits on your attack you keep rolling dice, one at a time, until you stop getting hits or you get up to 3 in a row.  So the weapon can potentially do 6 damage.  It's a good weapon to try for at long range and see what happens, as with the ship's ability and the range one bonus you can get up and hit with 5 anyway.

A good flanking ship. She doesn't have the hull or shields to stay in the main battle line, but is fast and mobile, and in the right position can hurt the enemy.
Labels: Attack Wing Star Trek