Flames of War is a WW2 15mm scale tabletop miniatures war game, and its good.  I had the 3rd edition Open Fire Starter Set full of beautiful models, but the rules where... very complex shall we shall.  Detailed most certainly, but it could be a bit daunting to approach.  Now BattleFront have released Flames of War
version 4, the new set of rules, and a new low priced starter set with Battle of El Alamein.  So have these new rules made things easier for new gamers, (even old gamers like me) to understand? does this set have what it takes to get me into the game?  I am not going to be comparing it to V3, as i didn't really play it due to being a bit scared off by the rules, i will be looking at the set, and how easy it is for new gamers to get their heads around the system. 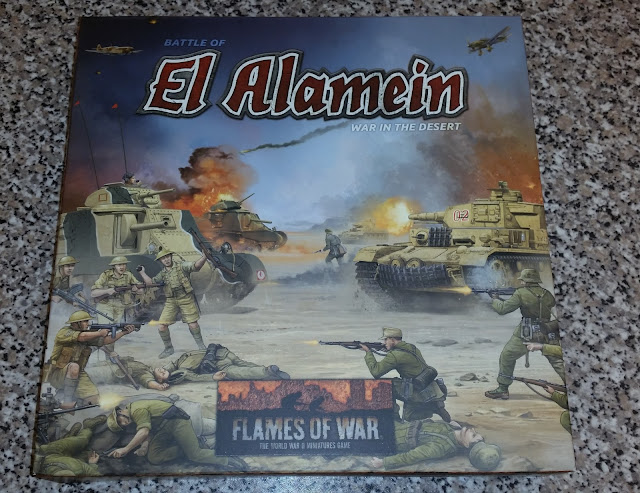 Lets start with that art.... stunning
To me, it has that old style "Victor or Warlord" annual look to it, and it really appeals to me....  now what are the contents, they are pretty important to a miniature war game too... so inside you get.. 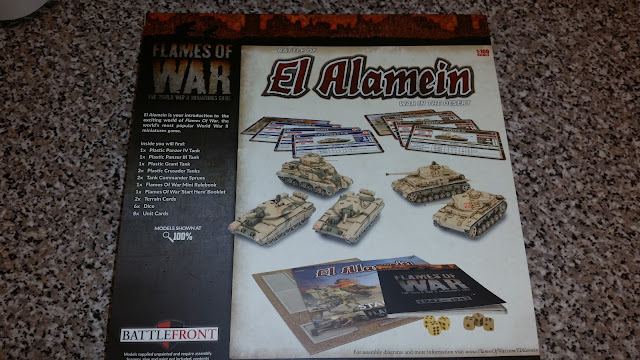 lets pop the box open get stuck in to the contents and see what to make of it...... 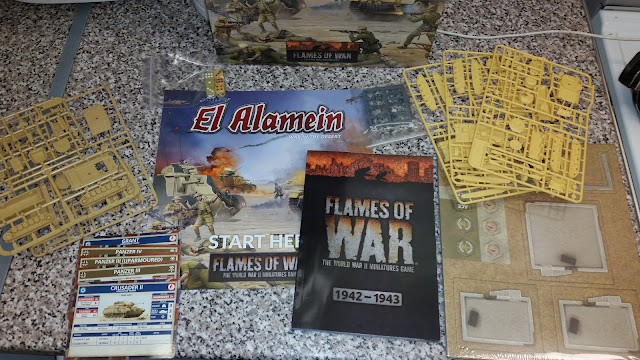 Once you have popped the box open, you are greeted by all the lovely contents, and there is a fair amount!  The models are on sprues, and will need assembly, but there is a nice simple guide in the "Start Here" book, so its nothing to be afraid of.  The Rulebook is nice quality, card terrain is good and thick, and the unit and order cards are nice glossy card.  Order cards you say? we shall come to that. 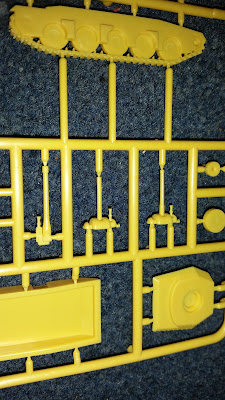 The plastic is lovely, high quality and crisp with details.  You also get plenty or nice options, such as the close support crusader, 6pdr armed Crusader, or 2 pounder armed crusader, and things like hatches open or closed and stowage too.  The getting started rulebook will give you a Nice step by guide on assembly for these, with the different options you can pick from clearly marked.

There are also options for tank commanders if you want to add them in, you don't have to but its a nice touch

Its worth studying the provided unit cars first though to get an idea of the kind of unit you want to aim towards completing.  Though the way the tank units operated in the desert war its pretty flexible for mixed units. 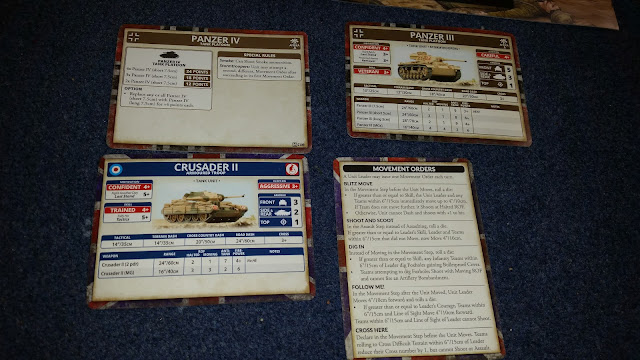 You get nice printed unit cards for the units in game, they have all the stats on them you will need, so you will not need to flip back forth in the rulebook to find them.  Its also very clearly laid out with the different distances you can move, which now cover moving in normal terrain, across terrain like swamps or harsher things and what you need to cross them, and on roads and firepower and effectiveness of your weapon systems.  It also gives you all the information on how easy they are to hit, and any special rules that may relate to them, a nice touch i like as i do not have to keep flipping to the rulebook and back again.  I like the card format, its certainly a good addition.

Movement orders.... that's new big thing giving you some really good tactical choices, but with with a drawback if you fail.  It tells you clearly what you need to do to try each order, as in which skill to roll against.  Take for Example the Blitz move....  You roll a dice before you move, if its equal or greater than your skill rating, you can make a move of up 4 inches without counting as moving, which is great for shooting.  Downside if you fail though, you can not dash limiting your movement options.  So its all risk and reward, but i like it, i imagine it as the commander giving orders to the unit for more specific actions, and hoping they accomplish it. 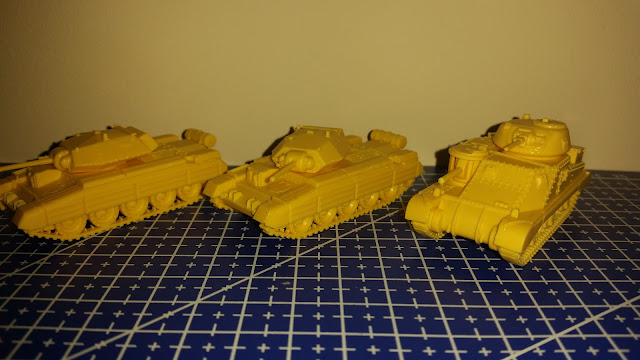 The models when built are great looking, and easy to put together.  With them being different coloured plastic you don't have to paint them to get playing as you can easily tell them apart, but with the amount of detail on them, its well worth painting them for pleasure. 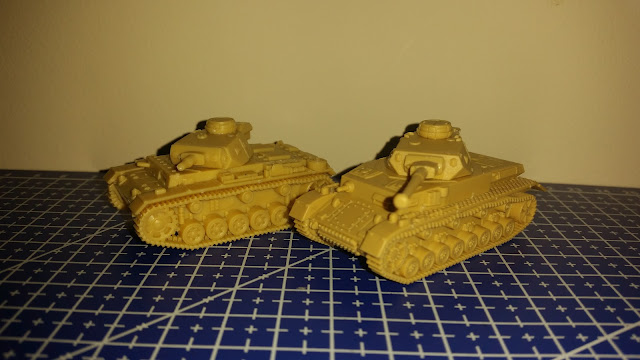 I decided with all the variety in the kit to go for a long barrelled panzer 4, and let Olivia choose the Panzer 3.  She picked the short stubby 75mm gun as it "looks cute" not sure that's a valid reason, but it IS a solid in game choice. 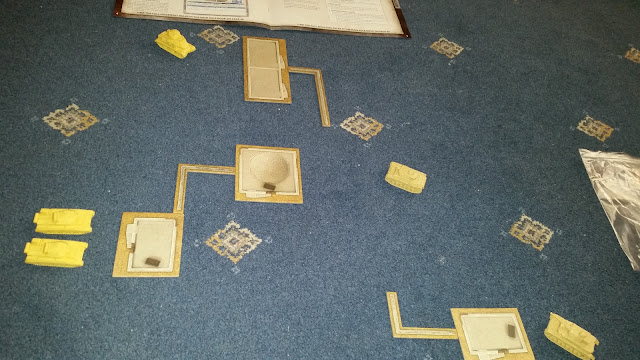 The card terrain in the set punches out cleanly, and looks good on the table, or in my case... floor.... but it provides some nice options you can tinker with yourself, or play the scenarios in the getting started booklet. 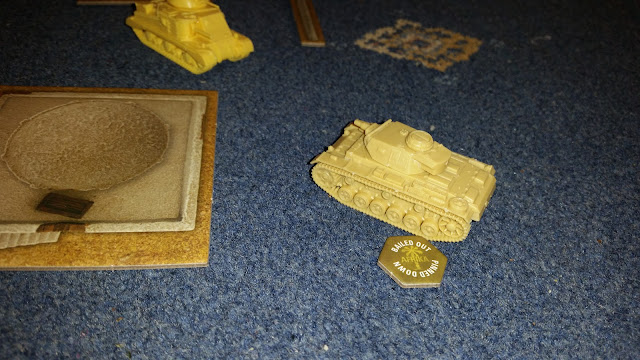 Some lucky dice rolls on my part meant i was only bailed out instead of destroyed! 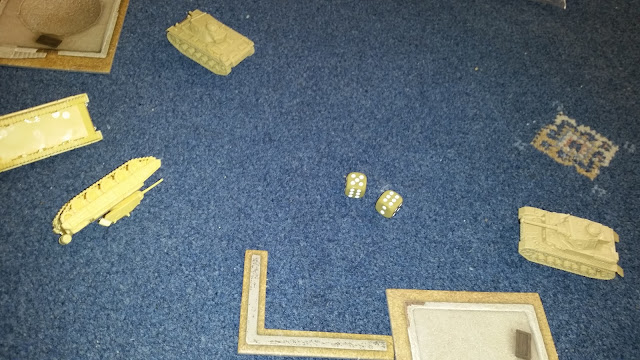 The Crusaders were not so lucky with the long 75 Panzer 4 shredding them. 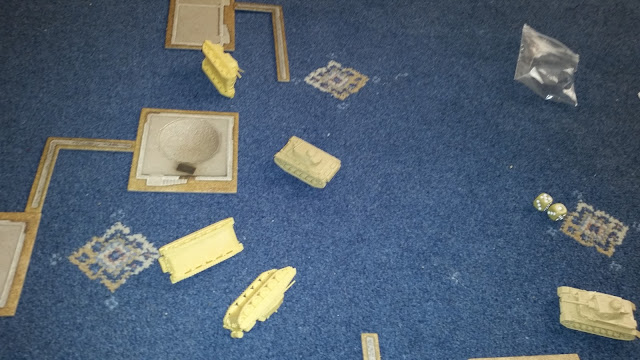 The Panzer 3 managed to remount, and then tore the grant up....  The game plays very fast with this set, but it teaches you the rules so well, and lets you get them done with the great getting started booklet, and it leaves you wanting more..... 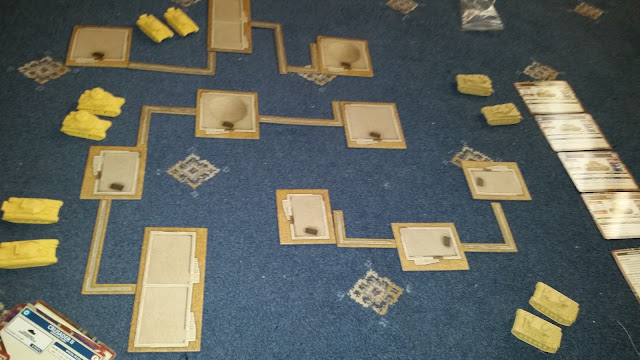 So why not pick up a set with a friend and double the terrain, and tanks too for  a still fast playing game


So the new rules? well I'm not going to go in depth with them and changes etc, I'm just going to tell you the important bits.  If you are a new player, its EASY to get into, nicely laid out and the rules sunk in.  Its not bogged down in over complication, though there is a lot of depth there, so well done to Battlefront, its the most accessible version of Flames of War i have seen, in fact its one of the most accessible tabletop wargames rules now in my opinion.  It gives the feel of WW2 in a larger scale, but doesn't drag you down with "Rivet Counting" It has rules for air support, artillery, infantry, all the toys you would expect to see on the tabletop, and delivers each aspect in an easy to understand way.  I don't know what it was about previous editions that left me scratching my head, as i have played all sorts of games, but this version.... sank in, simple to play, hard to master with a load of depth, clean rules, easy to understand rulebook...  Its a blast.  If you are a WW2 fan and haven't tried it, with an excellent value pricepoint its well worth picking up.  If you have never tried tabletop WW2 gaming either, its a great start that lets you dive in as deep as you want later.  An excellent set, well done Battlefront, I'm hoping all of version 4 is as nice.  You can also get plenty of tips, ideas painting advice and keep update on the latest models by heading to the  Flames of War site.

Basically if you want a WW2 tabletop game, you wont get better than this, it will keep expanding to cover all the war in the new format, but until then there are loads of books for it to get you playing any period from Normandy, to the Eastern Front and even the pacific, and all work within the new rule set.


The Set comes in at a great value RRP of £24.99, so head on over to your local game store and grab yourself a copy, remember Tank noises are encouraged but optional!
Come and join us in all sorts of gaming chat in our Facebook group here, and come follow us on Twitter @rollyoursix and Instagram join the chat, and tell us about your games!